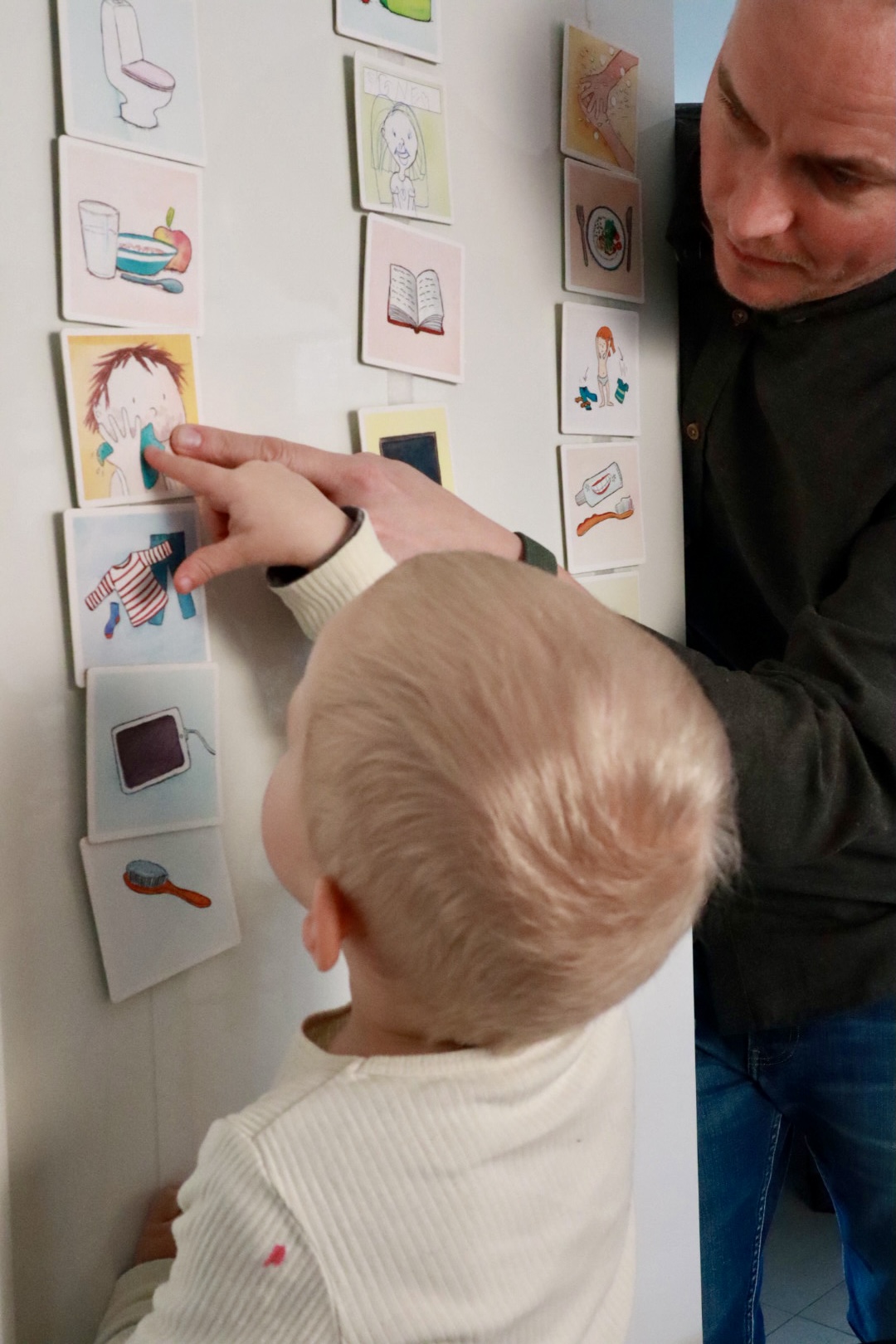 I’m sure I speak on behalf of all parents when I say that it’s so frustrating, as you have to be at work at a certain time. You feel the irritation and your stress level increase.

And later on you’re sitting at work with sweat on your forehead and the world’s biggest lump in your stomach, feeling guilty for having to play bad cop with the kids. It’s just so tiresome – both for parents and children, who often end up crying and a feeling like they’re not good enough.

“Can’t you just get out of bed in good time?”

We used to, and really we still do, but somehow our schedule always seemed to go down the drain. And the girls often decided they wanted to do some drawing or do a puzzle. And when there was no time for that, their world would come crashing down.

Perhaps it would be easier if the kids could understand the clock?

A positive effect from day one

I had mistakenly thought that pictograms were for children with particular challenges, such as autism and hadn’t thought of them as an option. But we all know that children need a framework, rules and structure.

The box contains lots of pictures, so I selected a few relevant ones and the girls and I made an example of a “schedule” for the evening. This made them feel involved, they had influence and got a self-esteem boost.

We have a schedule for the morning routine hanging in our kitchen. It hangs vertically and starts from the top down. It’s set up with blu tack, so it’s easy to change or move without damaging the surfaces of the cupboards or the picture cards. 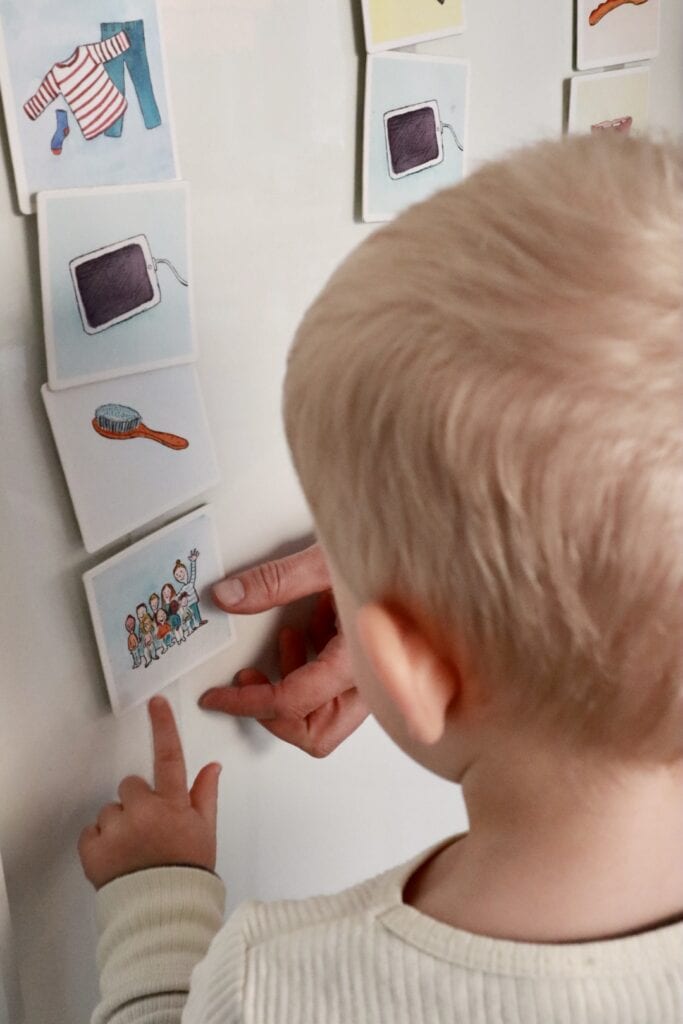 ✅ Our children check off on the program how far along we are and how close we are to leaving. This gives them an understanding of time and helps us get out the door on time – without conflicts. Of course, minor conflicts can arise, but overall, we have had a less stressful morning. Also little brother Hugo, 2, seems to benefit from the pictures.

Pictograms in a modern home

It’s a good idea to set up the pictograms in several places around the home. And when the illustrations are so pretty, what’s not to like? For example, you can set them up in places where they are visible during the morning routine – in thebathroom as reminders to brush teeth, brush hair, use cream, go to the toilet, etc.

You can quickly end up with long routines with lots of pictures. But I’ve learned that it’s best to keep them short and instead place them in several places around the house.

At home, we have the morning routine in the kitchen, the bedtime routine in the bedroom and “what should we have on and take with us” in the utility room. Here, for example, it’s important that we always remember extra batteries for the girls’ hearing aids (it’s also nice for us to always have a reminder).

You can read more about the pictograms here, where you can also see all the cards. They are prepared by the danish company Rebus Børneformindling, who are also happy to help. Also included is an excellent guide that tells you everything you need to know – even if you think it doesn’t work for you. 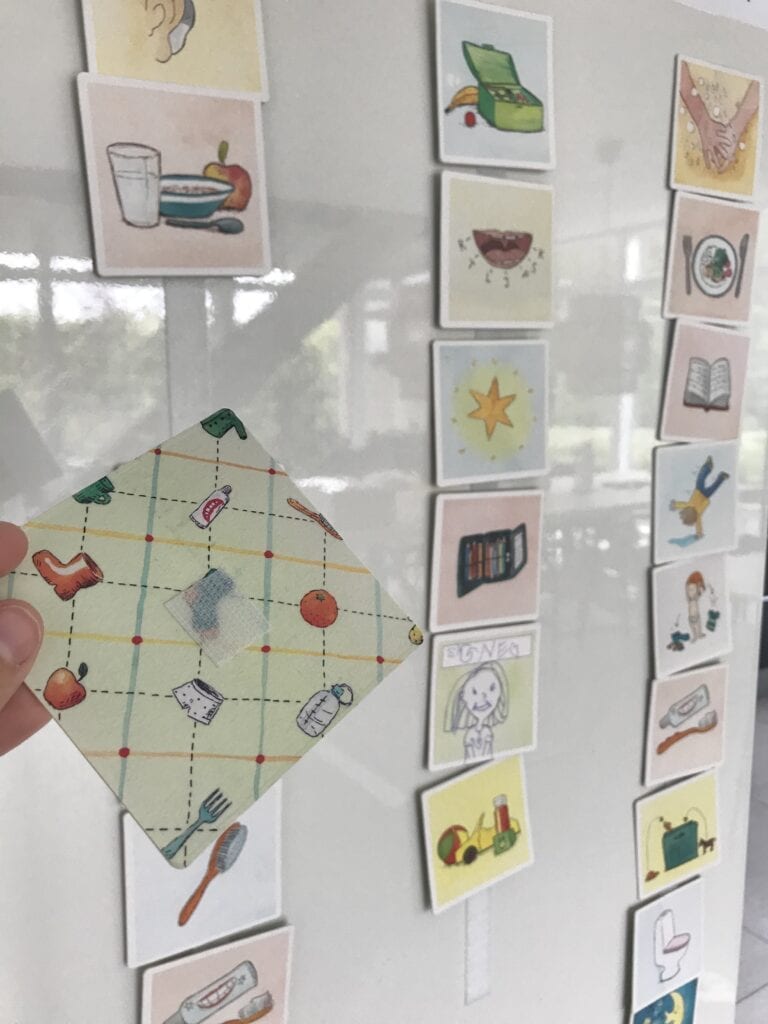 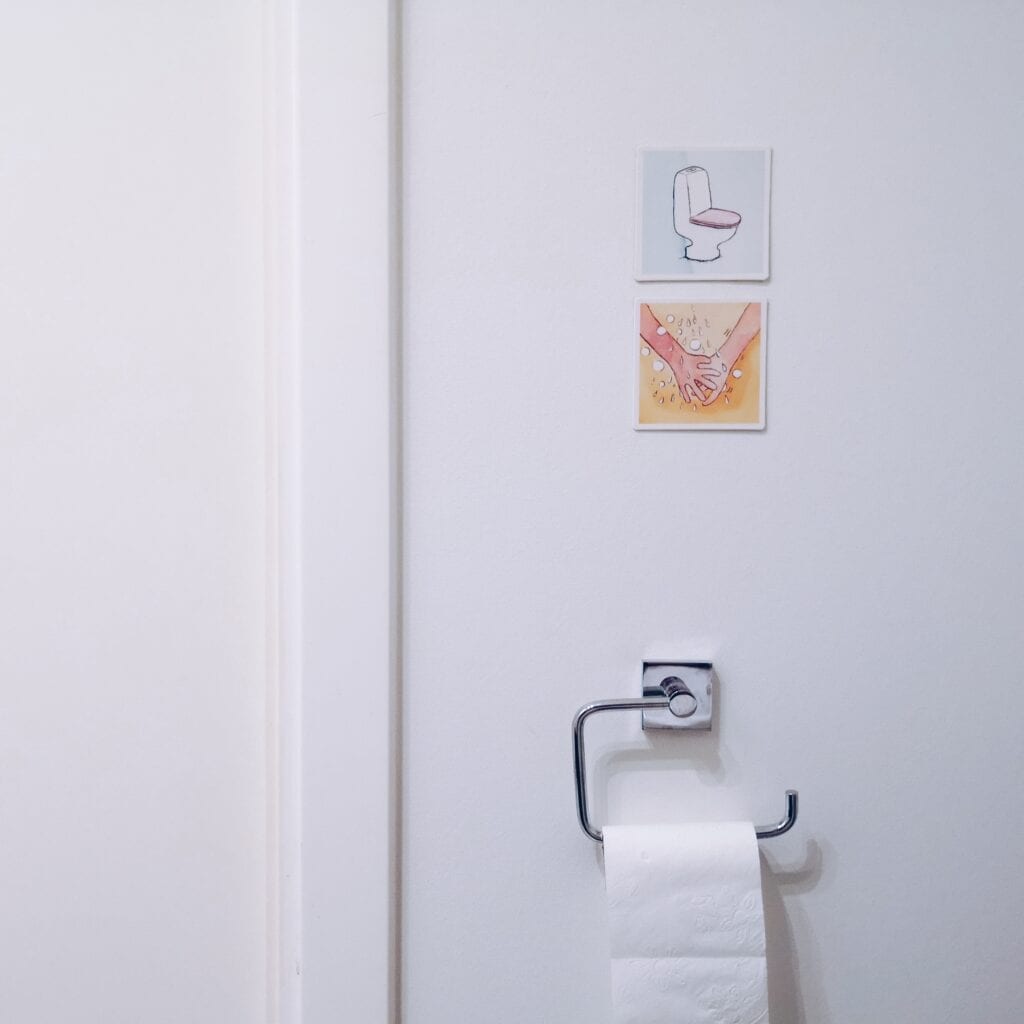